Member of the Royal Victorian Order, composer, and Knight Bachelor (from 1883)

Sir Arthur Seymour Sullivan MVO (13 May 1842 – 22 November 1900) was an English composer. He is best known for 14 operatic collaborations with the dramatist W. S. Gilbert, including H.M.S. Pinafore, The Pirates of Penzance and The Mikado. His works include 24 operas, 11 major orchestral works, ten choral works and oratorios, two ballets, incidental music to several plays, and numerous church pieces, songs, and piano and chamber pieces. His hymns and songs include "Onward, Christian Soldiers" and "The Lost Chord". The son of a military bandmaster, Sullivan composed his first anthem at the age of eight and was later a soloist in the boys' choir of the Chapel Royal. In 1856, at 14, he was awarded the first Mendelssohn Scholarship by the Royal Academy of Music, which allowed him to study at the academy and then at the Leipzig Conservatoire in Germany. His graduation piece, incidental music to Shakespeare's The Tempest (1861), was received with acclaim on its first performance in London. Among his early major works were a ballet, L'Île Enchantée (1864), a symphony, a cello concerto (both 1866), and his Overture di Ballo (1870). To supplement the income from his concert works he wrote hymns, parlour ballads and other light pieces, and worked as a church organist and music teacher. In 1866 Sullivan composed a one-act comic opera, Cox and Box, which is still widely performed. He wrote his first opera with W. S. Gilbert, Thespis, in 1871. Four years later, the impresario Richard D'Oyly Carte engaged Gilbert and Sullivan to create a one-act piece, Trial by Jury (1875). Its box-office success led to a series of twelve full-length comic operas by the collaborators. After the extraordinary success of H.M.S. Pinafore (1878) and The Pirates of Penzance (1879), Carte used his profits from the partnership to build the Savoy Theatre in 1881, and their joint works became known as the Savoy operas. Among the best known of the later operas are The Mikado (1885) and The Gondoliers (1889). Gilbert broke from Sullivan and Carte in 1890, after a quarrel over expenses at the Savoy. They reunited in the 1890s for two more operas, but these did not achieve the popularity of their earlier works. Sullivan's infrequent serious pieces during the 1880s included two cantatas, The Martyr of Antioch (1880) and The Golden Legend (1886), his most popular choral work. He also wrote incidental music for West End productions of several Shakespeare plays, and held conducting and academic appointments. Sullivan's only grand opera, Ivanhoe, though initially successful in 1891, has rarely been revived. In his last decade Sullivan continued to compose comic operas with various librettists and wrote other major and minor works. He died at the age of 58, regarded as Britain's foremost composer. His comic opera style served as a model for generations of musical theatre composers that followed, and his music is still frequently performed, recorded and pastiched. 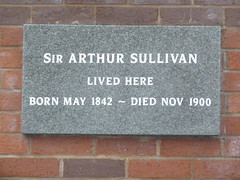 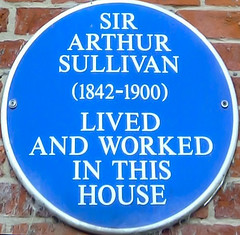 River House, Walton on Thames, United Kingdom where they lived and worked