Henry Taylor (17 March 1885 – 28 February 1951) was an English competitive swimmer who represented Great Britain in four Summer Olympics between 1906 and 1920. Taylor served in the Royal Navy during the First World War, and continued to swim competitively until 1926. His fortunes declined after he retired and he died penniless. His record of three gold medals at one Olympic Games – the most by any Briton – stood for 100 years until it was equaled by cyclist Chris Hoy in 2008. Tying the medal count of American Mel Sheppard, he was the most successful athlete at the 1908 Olympics. 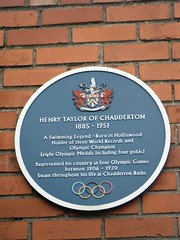 Henry Taylor of Chadderton 1885-1951 A swimming legend - born in Hollinwood. Holder of three World Records and Olympic Champion (eight Olympic Medals including four golds). Represented his country at four Olympic Games between 1906-1920. Swam throughout his life at Chadderton Baths