John Eric Bartholomew, OBE (14 May 1926 – 28 May 1984), known by his stage name Eric Morecambe, was an English comedian who together with Ernie Wise formed the double act Morecambe and Wise. The partnership lasted from 1941 until Morecambe's death in 1984. Morecambe took his stage name from his home town, the seaside resort of Morecambe in Lancashire. He was the co-star of the BBC One's television series The Morecambe & Wise Show, which for the 1977 Christmas episode gained UK viewing figures of over 28 million people. One of the most prominent comedians in British popular culture, in 2002 he was named one of the 100 Greatest Britons in a BBC poll. Morecambe, who had previously suffered heart attacks in November 1968 and March 1979 as well as undergoing bypass surgery, collapsed from a heart attack as he left the stage of the Roses Theatre in Tewkesbury, following a performance; he died in hospital a few hours later. 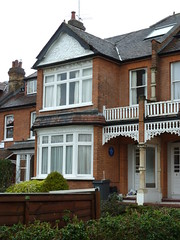 43 Christie Avenue, Morecambe, United Kingdom where they was