Jawaharlal Nehru (/ˈneɪru, ˈnɛru/; Hindi: [ˈdʒəʋɑːɦəɾˈlɑːl ˈneːɦɾuː]; juh-WAH-hurr-LAHL NE-hǝ-ROO; 14 November 1889 – 27 May 1964) was an Indian anti-colonial nationalist, secular humanist, social democrat and author who was a central figure in India during the middle third of the 20th century. Nehru was a principal leader of the Indian nationalist movement in the 1930s and 1940s. Upon India's independence in 1947, he served as the country's prime minister for 17 years. Nehru promoted parliamentary democracy, secularism, and science and technology during the 1950s, powerfully influencing India's arc as a modern nation. In international affairs, he steered India clear of the two blocs of the Cold War. A well-regarded author, his books written in prison, such as Letters from a Father to His Daughter (1929), An Autobiography (1936), and The Discovery of India (1946), were read around the world. The son of Motilal Nehru, a prominent lawyer and Indian nationalist, Jawaharlal Nehru was educated in England—at Harrow School and Trinity College, Cambridge, and trained in the law at the Inner Temple. He became a barrister, returned to India, enrolled at the Allahabad High Court and gradually began to take an interest in national politics, which eventually became a full-time occupation. He joined the Indian National Congress, rose to become the leader of a progressive faction during the 1920s, and eventually of the Congress, receiving the support of Mahatma Gandhi who was to designate Nehru as his political heir. As Congress president in 1929, Nehru called for complete independence from the British Raj. Nehru and the Congress dominated Indian politics during the 1930s. Nehru promoted the idea of the secular nation-state in the 1937 Indian provincial elections, allowing the Congress to sweep the elections, and to form governments in several provinces. In September 1939, the Congress ministries resigned to protest Viceroy Lord Linlithgow's decision to join the war without consulting them. After the All India Congress Committee's Quit India Resolution of 8 August 1942, senior Congress leaders were imprisoned and for a time the organization was crushed. Nehru, who had reluctantly heeded Gandhi's call for immediate independence, and had desired instead to support the Allied war effort during World War II, came out of a lengthy prison term to a much altered political landscape. The Muslim League, under Muhammad Ali Jinnah, had come to dominate Muslim politics in the interim. In the 1946 provincial elections, Congress won the elections but the League won all the seats reserved for Muslims, which the British interpreted to be a clear mandate for Pakistan in some form. Nehru became the interim prime minister of India in September 1946, with the League joining his government with some hesitancy in October 1946. Upon India's independence on August 15, 1947, Nehru gave a critically acclaimed speech, "Tryst with Destiny"; he was sworn in as the Dominion of India's prime minister and raised the Indian flag at the Red Fort in Delhi. On January 26, 1950, when India became a republic within the Commonwealth of Nations, Nehru became the Republic of India's first prime minister. He embarked on an ambitious program of economic, social, and political reforms. Nehru promoted a pluralistic multi-party democracy. In foreign affairs, he played a leading role in establishing the Non-Aligned Movement, a group of nations that did not seek membership in the two main ideological blocs of the 1950s. Under Nehru's leadership, the Congress emerged as a catch-all party, dominating national and state-level politics and winning elections in 1951, 1957 and 1962. Nehru remained popular with the Indian people despite India's defeat in the Sino-Indian War of 1962 for which he was widely blamed. He died as a result of a heart attack on 27 May 1964. His birthday is celebrated as Children's Day in India. 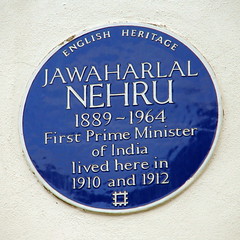