Ernest Raymond OBE (1888–1974) was a British novelist, best known for his first novel, Tell England (1922), set in World War I. His next biggest success was We, the Accused (1935), generally thought to be a reworking of the Crippen case. Raymond was a highly prolific writer, with an output forty-six novels, two plays and ten non-fiction works. 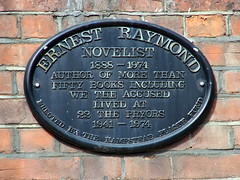