penmaker, educationalist, and Knight Bachelor (from 1872)

Sir Josiah Mason (23 February 1795 – 16 June 1881) was an English industrialist, engaged in pen manufacture and other trades, and a philanthropist. He founded Mason Science College in 1875, which later became the University of Birmingham. He was the son of a carpet-weaver, and was born in Mill Street, Kidderminster. He began life as a street hawker of cakes, fruits and vegetables. After trying his hand in his native town at shoemaking, baking, carpentering, blacksmithing, house-painting and carpet-weaving, he moved in 1816 to Birmingham. Here he found employment in the gilt-toy trade. In 1824 he set up on his own account as a manufacturer of split-rings by machinery, to which he subsequently added the making of steel pens. Owing to the circumstance of his pens being supplied through James Perry, the London stationer whose name they bore, he was less well known than Joseph Gillott and other makers, although he was really the largest producer in England, contributing heavily to the Birmingham pen trade. In 1874 the business was converted into a limited liability company. Besides his steel-pen trade Mason carried on for many years the business of electro-plating, copper-smelting, and India-rubber ring making, in conjunction with George Elkington. Mason was almost entirely self-educated, having taught himself to write when a shoemaker's apprentice, and in later life he felt his deficiencies keenly. It was this which led him in 1860 to establish his great orphanage at Erdington, near Birmingham. Upon it he expended about £300,000, and for this munificent endowment he was knighted in 1872. He had previously given a dispensary to his native town and an almshouse to Erdington. In 1880 Mason College, since incorporated in the University of Birmingham, was opened. The total value of the endowment was about £250,000. 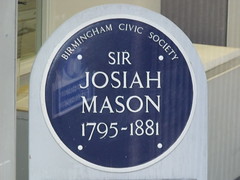 Central Library, Congreve Passage, Birmingham, United Kingdom where they was

Alexander Parkes 1813-1890 Inventor of the first plastic, worked on this site for Elkington, Mason & Company, electroplaters, circa 1840-1850

Here stood Sir Josiah Mason's Science College, later Mason University College, the nucleus of the University of Birmingham. It was founded upon the wealth and vision of Josiah Mason, a Kidderminster carpet weaver's son who had prospered by the manufacture of split rings and steel pens. He laid the first stone on his 80th birthday, 23rd February 1875. The College became the University upon the grant of a Royal Charter in 1900, and the building continued to accommodate the Faculties of Arts and Law until shortly before its demolition in 1963.