Muslim reformer, scholar, and Knight Commander of the Most Exalted Order of the Star of India (from 1888)

Sir Syed Ahmad Khan KCSI FRAS (17 October 1817 – 27 March 1898; also Sayyid Ahmad Khan) was an Indian Muslim reformer, philosopher, and educationist in nineteenth-century British India. Though initially espousing Hindu-Muslim unity, he became the pioneer of Muslim nationalism in India and is widely credited as the father of the two-nation theory, which formed the basis of the Pakistan movement. Born into a family with strong debts to the Mughal court, Ahmad studied the Quran and Sciences within the court. He was awarded an honorary LLD from the University of Edinburgh in 1889. In 1838, Syed Ahmad entered the service of East India Company and went on to become a judge at a Small Causes Court in 1867, retiring from 1876. During the Indian Mutiny of 1857, he remained loyal to the British Raj and was noted for his actions in saving European lives. After the rebellion, he penned the booklet The Causes of the Indian Mutiny – a daring critique, at the time, of various British policies that he blamed for causing the revolt. Believing that the future of Muslims was threatened by the rigidity of their orthodox outlook, Sir Ahmad began promoting Western–style scientific education by founding modern schools and journals and organising Islamic entrepreneurs. In 1859, Syed established Gulshan School at Muradabad, Victoria School at Ghazipur in 1863, and a scientific society for Muslims in 1864. In 1875, founded the Muhammadan Anglo-Oriental College, the first Muslim university in Southern Asia. During his career, Syed repeatedly called upon Muslims to loyally serve the British Raj and promoted the adoption of Urdu as the lingua franca of all Indian Muslims. Syed criticized the Indian National Congress. Sir Syed maintains a strong legacy in Pakistan and among Indian Muslims. He strongly influenced other Muslim leaders including Allama Iqbal and Muhammad Ali Jinnah. His advocacy of Islam's rationalist tradition, and at broader, radical reinterpretation of the Quran to make it compatible with science and modernity, continues to influence the global Islamic reformation. Many universities and public buildings in Pakistan bear Sir Syed's name. Aligarh Muslim University celebrated Sir Syed's 200th birth centenary with much enthusiasm on 17 October 2017. Former President of India Pranab Mukherjee was the chief guest. 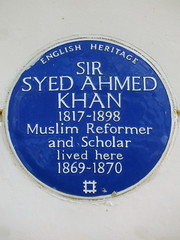