Sir Rudolf Ernst Peierls, CBE FRS (/ˈpaɪ.ərlz/; German: [ˈpaɪɐls]; 5 June 1907 – 19 September 1995) was a German-born British physicist who played a major role in Tube Alloys, Britain's nuclear weapon programme, as well as the subsequent Manhattan Project, the combined Allied nuclear bomb programme. His obituary in Physics Today described him as "a major player in the drama of the eruption of nuclear physics into world affairs". Peierls studied physics at the University of Berlin, at the University of Munich under Arnold Sommerfeld, the University of Leipzig under Werner Heisenberg, and ETH Zurich under Wolfgang Pauli. After receiving his DPhil from Leipzig in 1929, he became an assistant to Pauli in Zurich. In 1932, he was awarded a Rockefeller Fellowship, which he used to study in Rome under Enrico Fermi, and then at the Cavendish Laboratory at the University of Cambridge under Ralph H. Fowler. Because of his Jewish background, he elected to not return home after Adolf Hitler's rise to power in 1933, but to remain in Britain, where he worked with Hans Bethe at the Victoria University of Manchester, then at the Mond Laboratory at Cambridge. In 1937, Mark Oliphant, the newly appointed Australian professor of physics at the University of Birmingham recruited him for a new chair there in applied mathematics. In March 1940, Peierls co-authored the Frisch–Peierls memorandum with Otto Robert Frisch. This short paper was the first to set out that one could construct an atomic bomb from a small amount of fissile uranium-235. Until then it had been assumed that such a bomb would require many tons of uranium, and consequently was impractical to build and use. The paper was pivotal in igniting the interest of first the British and later the American authorities in nuclear weapons. He was also responsible for the recruitment of his compatriot Klaus Fuchs to work on Tube Alloys, as the British nuclear weapons project was called, which resulted in Peierls falling under suspicion when Fuchs was exposed as a spy for the Soviet Union in 1950. After the war, Peierls returned to the University of Birmingham, where he worked until 1963, and then was the Wykeham Professor of Physics at the University of Oxford until he retired in 1974. At Birmingham he worked on nuclear forces, scattering, quantum field theories, collective motion in nuclei, transport theory and statistical mechanics, and was a consultant to the Atomic Energy Research Establishment at Harwell. He received many awards, including a knighthood in 1968, and wrote several books including Quantum Theory of Solids, The Laws of Nature (1955), Surprises in Theoretical Physics (1979), More Surprises in Theoretical Physics (1991) and an autobiography, Bird of Passage (1985). Concerned with the nuclear weapons he had helped to unleash, he worked on the Bulletin of the Atomic Scientists, was President of the Atomic Scientists' Association in the UK, and was involved in the Pugwash movement. 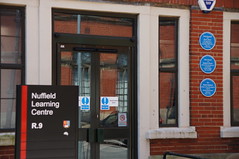