Major-General Charles George Gordon CB (28 January 1833 – 26 January 1885), also known as Chinese Gordon, Gordon Pasha, and Gordon of Khartoum, was a British Army officer and administrator. He saw action in the Crimean War as an officer in the British Army. However, he made his military reputation in China, where he was placed in command of the "Ever Victorious Army", a force of Chinese soldiers led by European officers which was instrumental in putting down the Taiping Rebellion, regularly defeating much larger forces. For these accomplishments, he was given the nickname "Chinese Gordon" and honours from both the Emperor of China and the British. He entered the service of the Khedive of Egypt in 1873 (with British government approval) and later became the Governor-General of the Sudan, where he did much to suppress revolts and the local slave trade. Exhausted, he resigned and returned to Europe in 1880. A serious revolt then broke out in the Sudan, led by a Muslim religious leader and self-proclaimed Mahdi, Muhammad Ahmad. In early 1884 Gordon was sent to Khartoum with instructions to secure the evacuation of loyal soldiers and civilians and to depart with them. In defiance of those instructions, after evacuating about 2,500 civilians he retained a smaller group of soldiers and non-military men. In the months before the fall of Khartoum, Gordon and the Mahdi corresponded; Gordon offered him the Sultanate of Kordofan and the Mahdi requested Gordon to convert to his religion and join him, to which Gordon replied abruptly: "No!"Besieged by the Mahdi's forces, Gordon organised a citywide defence that lasted for almost a year and gained him the admiration of the British public, but not of the government, which had wished him not to become entrenched. Only when public pressure to act had become irresistible did the government, with reluctance, send a relief force. It arrived two days after the city had fallen and Gordon had been killed. 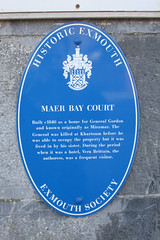 29 Woolwich Common, London, United Kingdom where they was born (1833)

In this house lived the Hero of Khartoum Gen. Charles George Gordon (Chinese Gordon) B.1833 D.1885