John Devon Roland Pertwee (/ˈpɜːrtwiː/; 7 July 1919 – 20 May 1996), known professionally as Jon Pertwee, was an English actor, comedian, entertainer and cabaret performer. Born into a theatrical family, he served in the Royal Navy and the Naval Intelligence Division during the Second World War. In his early career he worked as a stage comedian, which included performing at the Glasgow Empire Theatre and sharing a bill with Max Wall and Jimmy James. As an actor Pertwee appeared in many comedy roles, including four films in the Carry On series, and he became widely known for spending 18 years (1959–1977) playing Chief Petty Officer Pertwee (and three other roles) in the popular sitcom The Navy Lark on BBC Radio. On television, Pertwee starred as the Third Doctor in the science fiction series Doctor Who (1970–1974), hosted the game show Whodunnit? (1974–1978), and played the title character in Worzel Gummidge (1979–1981 and 1987–1989). Towards the end of his life he maintained a close association with Doctor Who by appearing at many fan conventions related to the series and giving interviews. He also performed a one-man show called Who Is Jon Pertwee?. 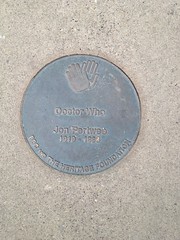