Richard Whittington (c. 1354–1423) of the parish of St Michael Paternoster Royal, City of London, was an English merchant and a politician of the late medieval period. He is also the real-life inspiration for the English folk tale Dick Whittington and His Cat. He was four times Lord Mayor of London, a member of parliament and a sheriff of London. In his lifetime he financed a number of public projects, such as drainage systems in poor areas of medieval London, and a hospital ward for unmarried mothers. He bequeathed his fortune to form the Charity of Sir Richard Whittington which, nearly 600 years later, continues to assist people in need. 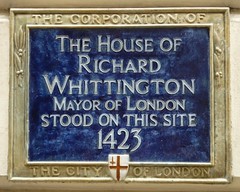 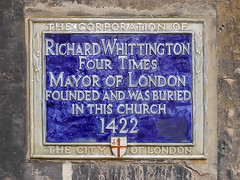