Leonhard Euler ( OY-lər; German: [ˈɔʏlɐ] (); 15 April 1707 – 18 September 1783) was a Swiss mathematician, physicist, astronomer, geographer, logician and engineer who made important and influential discoveries in many branches of mathematics, such as infinitesimal calculus and graph theory, while also making pioneering contributions to several branches such as topology and analytic number theory. He also introduced much of the modern mathematical terminology and notation, particularly for mathematical analysis, such as the notion of a mathematical function. He is also known for his work in mechanics, fluid dynamics, optics, astronomy and music theory. Euler was one of the most eminent mathematicians of the 18th century and is held to be one of the greatest in history. He is also widely considered to be the most prolific, as his collected works fill 92 volumes, more than anyone else in the field. He spent most of his adult life in Saint Petersburg, Russia, and in Berlin, then the capital of Prussia. A statement attributed to Pierre-Simon Laplace expresses Euler's influence on mathematics: "Read Euler, read Euler, he is the master of us all." 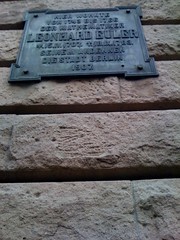 Behrenstr., Berlin, Germany where they lived