Professor of Architecture and architect

Sir Charles Herbert Reilly (4 March 1874 – 2 February 1948) was an English architect and teacher. After training in two architectural practices in London he took up a part-time lectureship at the University of London in 1900, and from 1904 to 1933 he headed the Liverpool School of Architecture, which became world-famous under his leadership. He was largely responsible for establishing university training of architects as an alternative to the old system of apprenticeship. Reilly was a strong and effective opponent of the Victorian Neo-Gothic style, which had dominated British architecture for decades. His dominance also ended the briefer popularity of the Arts and Crafts and Jugendstil movements in Britain, earning him the enmity of Charles Rennie Mackintosh, a local exponent of the latter. For many years Reilly favoured a form of Neo-Classicism strongly influenced by developments in American architecture. Later in his career, he embraced the principles of the modernist movement, and of town planning for social and aesthetic improvement. As a practising architect, Reilly was responsible for few well-known buildings. His influence on British architecture came through the work of his pupils, who included Herbert Rowse, Lionel Budden, William Holford and Maxwell Fry. Among his students were future professors of architecture and heads of architectural colleges in Britain, Canada and Australia; buildings were commissioned from Reilly pupils throughout the British Empire and beyond. 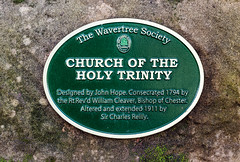 Church Of The Holy Trinity. Designed by John Hope. Consecrated 1794 by the Rt Rev'd William Cleaver, Bishop of Chester. Altered and extended 1911 by Sir Charles Reilly.

Church of the Holy Trinity, Church Road, Liverpool, United Kingdom where they designed (1911)