Lester Bowles Pearson PC OM CC OBE (23 April 1897 – 27 December 1972) was a Canadian scholar, statesman, soldier, and diplomat, who served as the 14th prime minister of Canada from 1963 to 1968, as the head of two back-to-back Liberal minority governments won in the elections of 1963 and 1965. Pearson was born in Toronto and pursued a career in the Department of External Affairs. From 1948 to 1957, he served as Secretary of State for External Affairs under Prime Ministers William Lyon Mackenzie King and Louis St. Laurent. He narrowly lost the bid to become Secretary-General of the United Nations in 1953. However, he won the Nobel Peace Prize in 1957 for organizing the United Nations Emergency Force to resolve the Suez Canal Crisis, which earned him praise and attention worldwide. After the Liberals' sudden defeat in the 1957 federal election, Pearson easily won the leadership of the Liberal Party in 1958. Pearson suffered two consecutive defeats by incumbent Progressive Conservative Prime Minister John Diefenbaker in 1958 and 1962, only to successfully challenge him for a third time in the 1963 federal election. During Pearson's tenure as prime minister, his government launched progressive policies such as universal health care, the Canada Student Loan Program, and the Canada Pension Plan. He also introduced the Order of Canada, and the Royal Commission on Bilingualism and Biculturalism. Pearson oversaw the creation of the Maple Leaf flag that was implemented in 1965. His government unified Canada's armed forces and kept Canada out of the Vietnam War. In 1967, Canada became the first country in the world to implement a points-based immigration system. After nearly half a decade in power, he resigned as Prime Minister and retired from politics. With his government programs and policies, together with his groundbreaking work at the United Nations and in international diplomacy, which included his role in ending the Suez Crisis, Pearson is generally considered among the most influential Canadians of the 20th century and is ranked among the greatest Canadian prime ministers. 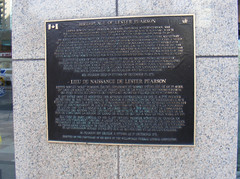 Sean_Marshall on Flickr All Rights Reserved
Toronto, ON, Canada

Birthplace of Lester Pearson Lester Bowles "Mike" Pearson, scholar, diplomat and statesman, was born in his parent's home, the Wesleyan Methodist Church manse, which stood on this site in the then village of Newtonbrook, on April 23, 1897. He joined the Department of External Affairs in 1928, becoming First Secretary of the Canadian High Commission in London (1935-41) and Ambassador to the United States (1945-46). He was Member of Parliament for Algoma East and Minister of External Affairs in the government of Louis St. Laurent (1948-1957) where he was instrumental in the founding of NATO (1949) and the Korean Armistice (1953). He was President of the United Nations General Assembly (1952-53) and the architect of the UN Peacekeeping Force in Suez for which he received the Nobel Peace Prize in 1957. Elected leader of the Liberal Party in 1958, he became Prime Minister of Canada in 1963. His government (1963-68) left a legacy of reform and pioneering social legislation which included the Canada Pension Plan, universal health care, the Canada Student Loan Plan, a new Canadian flag, and the Royal Commission on Bilingualism and Biculturalism. Mr. Pearson died in Ottawa on December 27, 1972.

south-west corner of Yonge Street and Hendon Avenue, Toronto, ON, Canada where they was born (1897)