Edmund Burke (/ˈbɜːrk/; 12 January [NS] 1729 – 9 July 1797) was an ethnically Irish British statesman, economist, and philosopher. Born in Dublin, Burke served as a member of parliament (MP) between 1766 and 1794 in the House of Commons of Great Britain with the Whig Party. Burke was a proponent of underpinning virtues with manners in society and of the importance of religious institutions for the moral stability and good of the state. These views were expressed in his A Vindication of Natural Society. He criticised the actions of the British government towards the American colonies, including its taxation policies. Burke also supported the rights of the colonists to resist metropolitan authority, although he opposed the attempt to achieve independence. He is remembered for his support for Catholic emancipation, the impeachment of Warren Hastings from the East India Company, and his staunch opposition to the French Revolution. In his Reflections on the Revolution in France, Burke asserted that the revolution was destroying the fabric of good society and traditional institutions of state and society and condemned the persecution of the Catholic Church that resulted from it. This led to his becoming the leading figure within the conservative faction of the Whig Party which he dubbed the Old Whigs as opposed to the pro-French Revolution New Whigs led by Charles James Fox. In the 19th century, Burke was praised by both conservatives and liberals. Subsequently, in the 20th century, he became widely regarded as the philosophical founder of conservatism. 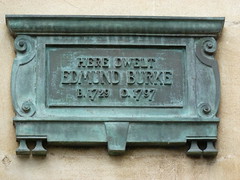 On this site stood The Bush, a celebrated coaching inn. Edmund Burke M.P. used it as his election campaign headquarters. In Pickwick Papers, Charles Dickens had Mr. Winkle stay there. The inn later became Bush Chambers, where Bristol & West Building Society was founded in 1850. The present building was erected in 1857 by The West of England and South Wales District Bank. The Architects W. B. Gingell and T. R. Lysaght based its High Renaissance style on Jacopo Sansovino's Library of St. Mark, Venice. It has been occupied by Lloyds Bank Limited since 1892 and the exterior remains substantially in its original form.