Field Marshal Edmund Henry Hynman Allenby, 1st Viscount Allenby, GCB, GCMG, GCVO (23 April 1861 – 14 May 1936) was an English soldier and British Imperial Governor. He fought in the Second Boer War and also in the First World War, in which he led the British Empire's Egyptian Expeditionary Force (EEF) during the Sinai and Palestine Campaign against the Ottoman Empire in the conquest of Palestine. The British succeeded in capturing Beersheba, Jaffa, and Jerusalem from October to December 1917. His forces occupied the Jordan Valley during the summer of 1918, then went on to capture northern Palestine and defeat the Ottoman Yildirim Army Group's Eighth Army at the Battle of Megiddo, forcing the Fourth and Seventh Army to retreat towards Damascus. Subsequently, the EEF Pursuit by Desert Mounted Corps captured Damascus and advanced into northern Syria. During this pursuit, he commanded T. E. Lawrence ("Lawrence of Arabia"), whose campaign with Faisal's Arab Sherifial Forces assisted the EEF's capture of Ottoman Empire territory and fought the Battle of Aleppo, five days before the Armistice of Mudros ended the campaign on 30 October 1918. He continued to serve in the region as High Commissioner for Egypt and Sudan from 1919 until 1925. 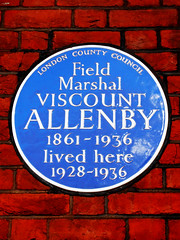