Sir Thomas Beecham, 2nd Baronet, CH (29 April 1879 – 8 March 1961) was an English conductor and impresario best known for his association with the London Philharmonic and the Royal Philharmonic orchestras. He was also closely associated with the Liverpool Philharmonic and Hallé orchestras. From the early 20th century until his death, Beecham was a major influence on the musical life of Britain and, according to the BBC, was Britain's first international conductor. Born to a rich industrial family, Beecham began his career as a conductor in 1899. He used his access to the family fortune to finance opera from the 1910s until the start of the Second World War, staging seasons at Covent Garden, Drury Lane and His Majesty's Theatre with international stars, his own orchestra and a wide repertoire. Among the works he introduced to England were Richard Strauss's Elektra, Salome and Der Rosenkavalier and three operas by Frederick Delius. Together with his younger colleague Malcolm Sargent, Beecham founded the London Philharmonic, and he conducted its first performance at the Queen's Hall in 1932. In the 1940s he worked for three years in the United States where he was music director of the Seattle Symphony and conducted at the Metropolitan Opera. After his return to Britain, he founded the Royal Philharmonic in 1946 and conducted it until his death in 1961. Beecham's repertoire was eclectic, sometimes favouring lesser-known composers over famous ones. His specialities included composers whose works were neglected in Britain before he became their advocate, such as Delius and Berlioz. Other composers with whose music he was frequently associated were Haydn, Schubert, Sibelius and the composer he revered above all others, Mozart. 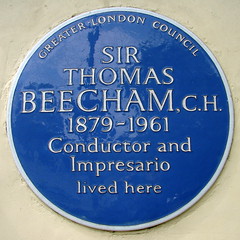 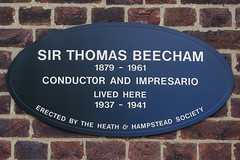