Gaius Julius Caesar (Latin: [ˈɡaːiʊs ˈjuːliʊs ˈkae̯sar]; 12 July 100 BC – 15 March 44 BC) was a Roman general and statesman. A member of the First Triumvirate, Caesar led the Roman armies in the Gallic Wars before defeating his political rival Pompey in a civil war, and subsequently became dictator of Rome from 49 BC until his assassination in 44 BC. He played a critical role in the events that led to the demise of the Roman Republic and the rise of the Roman Empire. In 60 BC, Caesar, Crassus and Pompey formed the First Triumvirate, a political alliance that dominated Roman politics for several years. Their attempts to amass power as Populares were opposed by the Optimates within the Roman Senate, among them Cato the Younger with the frequent support of Cicero. Caesar rose to become one of the most powerful politicians in the Roman Republic through a string of military victories in the Gallic Wars, completed by 51 BC, which greatly extended Roman territory. During this time he both invaded Britain and built a bridge across the Rhine river. These achievements and the support of his veteran army threatened to eclipse the standing of Pompey, who had realigned himself with the Senate after the death of Crassus in 53 BC. With the Gallic Wars concluded, the Senate ordered Caesar to step down from his military command and return to Rome. In 49 BC, Caesar openly defied the Senate's authority by crossing the Rubicon and marching towards Rome at the head of an army. This began Caesar's civil war, which he won, leaving him in a position of near unchallenged power and influence in 45 BC. After assuming control of government, Caesar began a program of social and governmental reforms, including the creation of the Julian calendar. He gave citizenship to many residents of far regions of the Roman Republic. He initiated land reform and support for veterans. He centralized the bureaucracy of the Republic and was eventually proclaimed "dictator for life" (dictator perpetuo). His populist and authoritarian reforms angered the elites, who began to conspire against him. On the Ides of March (15 March), 44 BC, Caesar was assassinated by a group of rebellious senators led by Brutus and Cassius, who stabbed him to death. A new series of civil wars broke out and the constitutional government of the Republic was never fully restored. Caesar's great-nephew and adopted heir Octavian, later known as Augustus, rose to sole power after defeating his opponents in the last civil war of the Roman Republic. Octavian set about solidifying his power, and the era of the Roman Empire began. Caesar was an accomplished author and historian as well as a statesman; much of his life is known from his own accounts of his military campaigns. Other contemporary sources include the letters and speeches of Cicero and the historical writings of Sallust. Later biographies of Caesar by Suetonius and Plutarch are also important sources. Caesar is considered by many historians to be one of the greatest military commanders in history. His cognomen was subsequently adopted as a synonym for "Emperor"; the title "Caesar" was used throughout the Roman Empire, giving rise to modern cognates such as Kaiser and Tsar. He has frequently appeared in literary and artistic works, and his political philosophy, known as Caesarism, inspired politicians into the modern era. 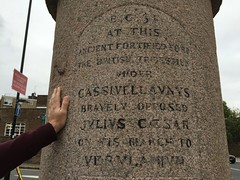 The Beach, Walmer, United Kingdom where they landed

BC 51. At this ancient fortified fort tribesmen under Cassivellaunus bravely opposed Julius Caesar on his march to Verulamium

The entrenchment is part of a British city built in the 1st century BC. It was probably here that Julius Caesar defeated the British king Cassivellaunus in 54 BC