Academy Award Winner, BAFTA Award recipient, actor, Commander of the Most Excellent Order of the British Empire (from 1955), Knight Bachelor (from 1959), and Companion of Honour (from 1994)

Sir Alec Guinness CH CBE (born Alec Guinness de Cuffe; 2 April 1914 – 5 August 2000) was an English actor. After an early career on the stage, Guinness was featured in several of the Ealing Comedies, including Kind Hearts and Coronets (1949), in which he played nine different characters, The Lavender Hill Mob (1951), for which he received his first Academy Award nomination, and The Ladykillers (1955). He collaborated six times with director David Lean: Herbert Pocket in Great Expectations (1946), Fagin in Oliver Twist (1948), Col. Nicholson in The Bridge on the River Kwai (1957), for which he won both the Academy Award for Best Actor and the BAFTA Award for Best Actor, Prince Faisal in Lawrence of Arabia (1962), General Yevgraf Zhivago in Doctor Zhivago (1965), and Professor Godbole in A Passage to India (1984). In 1970 he played Jacob Marley's ghost in Ronald Neame's Scrooge. He also portrayed Obi-Wan Kenobi in George Lucas's original Star Wars trilogy; for the original 1977 film, he was nominated for Best Supporting Actor at the 50th Academy Awards. Guinness began his stage career in 1934. Two years later, at the age of 22, he played the role of Osric in Hamlet in the West End and joined the Old Vic. He continued to play Shakespearean roles throughout his career. He was one of the greatest British actors, along with Laurence Olivier and John Gielgud, who made the transition from theatre to films after the Second World War. Guinness served in the Royal Naval Reserve during the war and commanded a landing craft during the invasion of Sicily and Elba. During the war he was granted leave to appear in the stage play Flare Path about RAF Bomber Command. Guinness won an Academy Award, a BAFTA, a Golden Globe and a Tony Award. In 1959 he was knighted by Elizabeth II for services to the arts. He received a star on the Hollywood Walk of Fame in 1960, the Academy Honorary Award for lifetime achievement in 1980 and the BAFTA Academy Fellowship Award in 1989. Guinness appeared in nine films that featured in the BFI's 100 greatest British films of the 20th century, which included five of Lean's films. 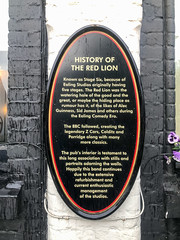 Upper St. Martin's Lane, London, United Kingdom where they was

History of The Red Lion Known as Stage Six, because of Ealing Studios originally having five stages. The Red Lion was the watering hole of the good and the great, or maybe the hiding place as rumour has it, of the likes of Alec Guinness, Sid James and others during the Ealing Comedy Era. The BBC followed, creating the legendary Z Cars, Colditz and Porridge along with many more classics. The pub's interior is testament to this long association with stills and portraits adorning the walls. Happily this bond continues due to the extensive refurbishment and current enthusiastic management of the studios.

13 St Mary's Rd, Ealing, United Kingdom where they was