Prince Rupert of the Rhine, Duke of Cumberland, KG, PC, FRS (17 December 1619 (O.S.) / 27 December (N.S) – 29 November 1682) was a German-English army officer, admiral, scientist and colonial governor. He first came to prominence as a Royalist cavalry commander during the English Civil War. Rupert was the third son of the German Prince Frederick V of the Palatinate and Elizabeth, eldest daughter of King James VI and I of Scotland and England. Prince Rupert had a varied career. He was a soldier as a child, fighting alongside Dutch forces against Habsburg Spain during the Eighty Years' War (1568–1648), and against the Holy Roman Emperor in Germany during the Thirty Years' War (1618–1648). Aged 23, he was appointed commander of the Royalist cavalry during the English Civil War, becoming the archetypal "Cavalier" of the war and ultimately the senior Royalist general. He surrendered after the fall of Bristol and was banished from England. He served under King Louis XIV of France against Spain, and then as a Royalist privateer in the Caribbean Sea. Following the Restoration, Rupert returned to England, becoming a senior English naval commander during the Second Anglo-Dutch War and Third Anglo-Dutch War, and serving as the first governor of the Hudson's Bay Company. He died in England in 1682, aged 62. Rupert is considered to have been a quick-thinking and energetic cavalry general, but ultimately undermined by his youthful impatience in dealing with his peers during the Civil War. In the Interregnum, Rupert continued the conflict against Parliament by sea from the Mediterranean to the Caribbean, showing considerable persistence in the face of adversity. As the head of the Royal Navy in his later years, he showed greater maturity and made impressive and long-lasting contributions to the Royal Navy's doctrine and development. As a colonial governor, Rupert shaped the political geography of modern Canada: Rupert's Land was named in his honour, and he was a founder of the Hudson's Bay Company. He also is alleged to have played a role in the early Atlantic slave trade. Rupert's varied and numerous scientific and administrative interests combined with his considerable artistic skills made him one of the more colourful public figures in England of the Restoration period.

nephew of Charles I 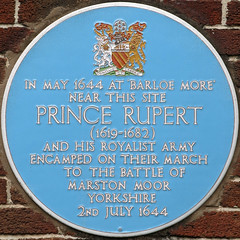 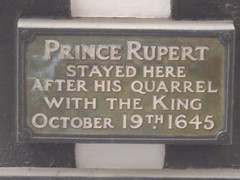 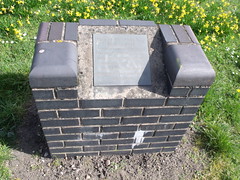 The Governor's House, Newark-on-Trent, United Kingdom where they stayed

Bordesley Middleway, Camp Hill Circus, Birmingham, United Kingdom where they headquarters when he with a force of 2000 men attacked Birmingham on Easter Monday 3rd April 1643 (1643)