woman, publisher of the first street and trade directory of Manchester, author of one of the earliest cookery books, founder of the first employment agency for domestic servants, and ran the Bulls Head Inn

Elizabeth Raffald (1733 – 19 April 1781) was an English author, innovator and entrepreneur. Born and raised in Doncaster, Yorkshire, Raffald went into domestic service for fifteen years, ending as the housekeeper to the Warburton baronets at Arley Hall, Cheshire. She left her position when she married John, the estate's head gardener. The couple moved to Manchester, Lancashire, where Raffald opened a register office to introduce domestic workers to employers; she also ran a cookery school and sold food from the premises. In 1769 she published her cookery book The Experienced English Housekeeper, which contains the first recipe for a "Bride Cake" that is recognisable as a modern wedding cake. She is also possibly the inventor of the Eccles cake. In August 1772 Raffald published The Manchester Directory, a listing of 1,505 traders and civic leaders in Manchester—the first such listing for the up-and-coming town. The Raffalds went on to run two important post houses in Manchester and Salford before running into financial problems, possibly brought on by John's heavy drinking. Raffald began a business selling strawberries and hot drinks during the strawberry season. She died suddenly in 1781, just after publishing the third edition of her directory and while still updating the eighth edition of her cookery book. After her death there were fifteen official editions of her cookery book, and twenty-three pirated ones. Her recipes were heavily plagiarised by other authors, notably by Isabella Beeton in her bestselling Mrs Beeton's Book of Household Management (1861). Raffald's recipes have been admired by several modern cooks and food writers, including Elizabeth David and Jane Grigson. 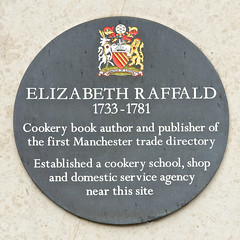 Elizabeth Raffald (1733 - 1781) Published the first street and trade directory of Manchester. Wrote one of the earliest cookery books. Started the first employment agency for domestic servants. Ran the Bulls Head Inn which stood on this site.

Selfridges, 7 Market Street, Manchester, United Kingdom where they worked near

Elizabeth Raffald 1733-1781, author, innovator, entrepreneur, benefactor, whose family built this pub in 1815, and who lies buried nearby in St Mary's churchyard. Wrote 'The Experienced English Housekeeper' in 1769.

The Arden Arms, 23 Millgate, Stockport, United Kingdom where they worked