Doctor of Medicine and founder of the Royal Mineral Water Hospital

William Oliver (14 August [O.S. 4 August] 1695 – 17 March 1764) was an English physician and philanthropist, and inventor of the Bath Oliver. He was born at Ludgvan, Cornwall, and baptised on 27 August 1695, described as the son of John Oliver the owner of the Trevarno Estate. His family, originally seated at Trevarnoe in Sithney, resided afterwards in Ludgvan, and the estate of Treneere in Madron, which belonged to him, was sold in 1768 after his death. When he decided to erect a monument in Sithney churchyard to the memory of his parents, Alexander Pope wrote the epitaph and drew the design of the pillar. He was admitted a pensioner of Pembroke College, Cambridge on 17 September 1714, graduated M.B. in 1720, and M.D. in 1725, and to complete his medical training, entered at Leiden University on 15 November 1720. On 8 July 1756 he was incorporated at Oxford, and he was elected a Fellow of the Royal Society on 22 January 1729–30. 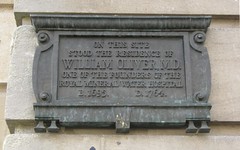 On this site stood the residence of William Oliver, M.D. One of the founders of the Royal Mineral Water Hospital B. 1695 D. 1764