Peggy Ann Wood (14 June 1912 – 30 May 1998) was a British actress, director and theatre manager associated heavily with the Bristol Old Vic. In partnership with her husband, (1910–1994), she ran the repertory company the , based in Bristol's Colston Hall. During the Second World War, Peggy Ann Wood ran the theatre whilst Ronnie served in the Police War Reserves, and once the Prince's Theatre had been bombed in November 1940, the Rapier Players provided the only live theatre in the city of Bristol. The contribution of Ronnie Russell and Peggy Ann Wood to the theatrical heritage of Bristol was commemorated with a Blue Plaque Ceremony in July 2002, which is situated on the outside of Colston Hall, Bristol. 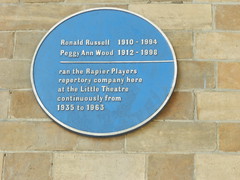