James Harrison (1814–66) was an English architect who practised in Chester, Cheshire, England. He is considered to be a pioneer of the Black-and-white Revival, an example of which is 51–53, Bridge Street, Chester, built in 1858. In 1862 he rebuilt the medieval timber-framed God's Providence House in Chester, which has been described as "the first conservation case in the modern sense". He designed new churches in Gothic Revival style, some of which have been designated as listed buildings, including Holy Ascension Church, Upton by Chester, Holy Trinity Church, Capenhurst, St Luke's Church, Dunham on the Hill, and Holy Trinity Church, Chester. Harrison also made alterations to other churches, including the virtual rebuilding of St Michael's Church, Chester, rebuilding the nave of All Saints Church, Handley, and working on the tower of the Church of St Mary-on-the Hill, Chester. He designed the Trustee Savings Bank in Chester, and converted the medieval St Nicholas' Chapel in Chester into a concert hall. Harrison worked for Robert Balfour, building farms on his Bolesworth estate, and at Tattenhall Hall. 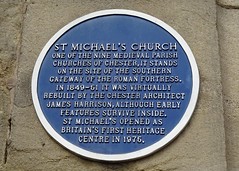 The Guildhall The former church of Holy Trinity is now the Guildhall of the freemen and guilds of Chester. From medieval times, the guilds regulated trade in the city and produced the famous mystery plays until 1575. The original church was rebuilt 1865 - 69 to the design of the Chester architect James Harrison

The Guildhall, Watergate Street, Chester, United Kingdom where they designed

St. Nicholas's Chapel. Originally a medieval chapel, this was Chester's Commonhall in the 16th Century and later became the Wool Hall. It was licensed as the Theatre Royal in 1777, and converted into the Chester Music Hall by James Harrison in 1855. Charles Dickens performed here in 1867.