Captain Robert von Ranke Graves (24 July 1895 – 7 December 1985) was a British poet, historical novelist and critic. His father was Alfred Perceval Graves, a celebrated Irish poet and figure in the Gaelic revival; they were both Celticists and students of Irish mythology. Graves produced more than 140 works in his lifetime. His poems, his translations and innovative analysis of the Greek myths, his memoir of his early life—including his role in World War I—Good-Bye to All That, and his speculative study of poetic inspiration The White Goddess have never been out of print. He is also a renowned short story writer, with stories such as 'The Tenement' still being popular today He earned his living from writing, particularly popular historical novels such as I, Claudius; King Jesus; The Golden Fleece; and Count Belisarius. He also was a prominent translator of Classical Latin and Ancient Greek texts; his versions of The Twelve Caesars and The Golden Ass remain popular for their clarity and entertaining style. Graves was awarded the 1934 James Tait Black Memorial Prize for both I, Claudius and Claudius the God. 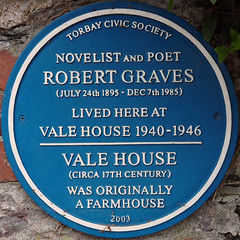 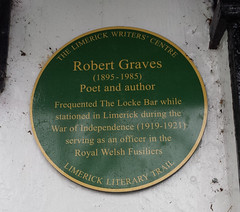 "My subject is war, and the pity of war. The poetry is in the pity." On 13th October 1...
Edinburgh, United Kingdom 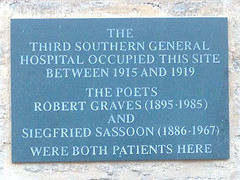 Lauriston Road, Merton, London, United Kingdom where they was born (1895)

Locke Bar, George's Quay, Limerick, Ireland where they was

"My subject is war, and the pity of war. The poetry is in the pity." On 13th October 1917 three poets of the Great War met at Baberton Golf Club, Juniper Green Wilfred Owen, Siegfried Sassoon, Robert Graves This plaque was unveiled 100 years later by the Rt Hon Lord Provost of the City of Edinburgh Frank Ross, local historian Neil McLennan and local residents in remembrance of that meeting and the fallen of World War One 1914-1918 Plaque kindly donated by Specialized Signs, Edinburgh

Somerville College, Woodstock Road, Oxford, United Kingdom where they was a patient