Wilfred Edward Salter Owen MC (18 March 1893 – 4 November 1918) was an English poet and soldier. He was one of the leading poets of the First World War. His war poetry on the horrors of trenches and gas warfare was much influenced by his mentor Siegfried Sassoon and stood in contrast to the public perception of war at the time and to the confidently patriotic verse written by earlier war poets such as Rupert Brooke. Among his best-known works – most of which were published posthumously – are "Dulce et Decorum est", "Insensibility", "Anthem for Doomed Youth", "Futility", "Spring Offensive" and "Strange Meeting". 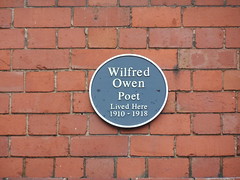 "My subject is war, and the pity of war. The poetry is in the pity." On 13th October 1...
Edinburgh, United Kingdom

Clifton Hotel, Queens Parade, Scarborough, United Kingdom where they was

24 Borrage Lane, Ripon, United Kingdom where they lived and wrote

"My subject is war, and the pity of war. The poetry is in the pity." On 13th October 1917 three poets of the Great War met at Baberton Golf Club, Juniper Green Wilfred Owen, Siegfried Sassoon, Robert Graves This plaque was unveiled 100 years later by the Rt Hon Lord Provost of the City of Edinburgh Frank Ross, local historian Neil McLennan and local residents in remembrance of that meeting and the fallen of World War One 1914-1918 Plaque kindly donated by Specialized Signs, Edinburgh

London Road campus, on the wall next to the war memorial tower, Reading, United Kingdom where they studied (1912)