actor, Commander of the Most Excellent Order of the British Empire, and Baron Attenborough (from 1993)

Richard Samuel Attenborough, Baron Attenborough Kt CBE FRSA (/ˈætənbərə/; 29 August 1923 – 24 August 2014) was an English actor, filmmaker, and entrepreneur. He was the president of the Royal Academy of Dramatic Art (RADA) and the British Academy of Film and Television Arts (BAFTA), as well as the life president of Chelsea FC. He joined the Royal Air Force during the Second World War and served in the film unit, going on several bombing raids over Europe and filming the action from the rear gunner's position. He was the older brother of broadcaster Sir David Attenborough and motor executive John Attenborough. He was married to actress Sheila Sim from 1945 until his death. For his directorial debut, 1969's Oh! What a Lovely War, Attenborough was nominated for the BAFTA Award for Best Direction, and he was nominated for his films Young Winston, A Bridge Too Far, and Cry Freedom. He won two Academy Awards for Gandhi in 1983: Best Picture and Best Director. The BFI ranked Gandhi the 34th greatest British film of the 20th century. Attenborough also won four BAFTA Awards, four Golden Globe Awards, and the 1983 BAFTA Fellowship for lifetime achievement. As an actor, he is best remembered for his roles in Brighton Rock (1948), I'm All Right Jack (1959), The Great Escape (1963), The Sand Pebbles (1966), Doctor Dolittle (1967), 10 Rillington Place (1971), Jurassic Park (1993), and Miracle on 34th Street (1994). 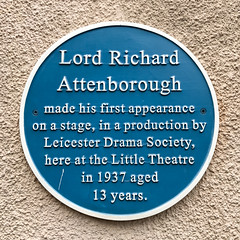 Lord Richard Attenborough made his first appearance on the stage, in a production by the Leicester Drama Society, here at the Little Theatre in 1937 aged 13 years

Little Theatre, Dover Street, Leicester, United Kingdom where they was