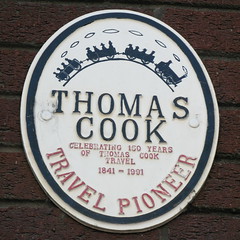 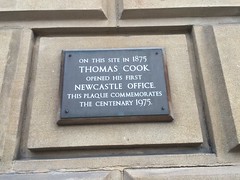 Welford Place, Leicester, United Kingdom where they was

On this site in 1875 Thomas Cook opened his first Newcastle office. This plaque commemorates the centenary 1975.

Thomas Cook, travel agent, born here 1808. This plaque marks the site of the birthplace of Thomas Cook (1808-1892), demolished in 1967. It was newly built when Cook was born, but had little else to recommend it. It was a small and simple semi-detached cottage about thirteen feet by thirteen feet, reached from the narrow street by a path. Quick Close was originally a field used for growing hawthorn plants (known as "quick") for hedging purposes, but in 1796 it was developed for building. The street was only twelve feet wide and the houses were irregular, so the area was demolished under "slum clearance" measures in the 1960's. The existing housing development was formally opened in 1972. Cook's family was poor, but he was lucky enough to be sent to school. Aged 10, he was sent to work for a gardener named Robey, and at fourteen he was apprenticed to John Pegg, wood turner, his uncle's father. Cook left Melbourne permanently when he was twenty, and by 1833 he was working as a wood turner in Market Harborough. Cook described his early years in Melbourne as hard toil. He noted that Pegg spent much of his leisure time and money on drink, so that "notwithstanding a good business, he lived and died a poor man" and had not improved his lot in life. Learning by this example, Cook joined the "temperance" movement, which advocated abstinence "from all intoxicating liquors". Cook's first organised trip, in 1841, was to transport a temperance group from Leicester to Loughborough and back. He continued to link the travel business with other interests on his personal agenda, causing a rift with his more businesslike son John Mason Cook. Despite the conflict between father and son, business boomed. Tours expanded to the continent, and then to the wider world. Thomas left a permanent legacy to Melbourne by building the handsome mission hall and memorial cottages on High Street, completed in 1891. They were built within sight of his ageing and humble birthplace, illustrating the strong contrast between his modest beginnings and the fame of his later life.

Corner of Quick Close and George Street, Melbourne, United Kingdom where they was born (1808)