Herbert Austin, 1st Baron Austin KBE (8 November 1866 – 23 May 1941) was an English automobile designer and builder who founded the Austin Motor Company. For the majority of his career he was known as Sir Herbert Austin, and the Northfield bypass is called "Sir Herbert Austin Way" after him. 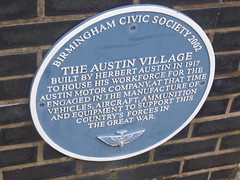 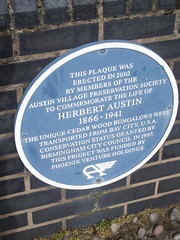 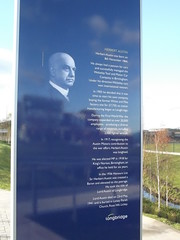 The Austin Village built by Herbert Austin in 1917 to house his workforce for the Austin Motor Company, at that time engaged in the manufacture of vehicles, aircraft, ammunition and equipment to support this country's forces in the Great War.

This plaque was erected in 2002 by members of the Austin Village Preservation Society to commemorate the life of Herbert Austin 1866-1941. The unique cedar wood bungalows were transported from Bay City, U.S.A. Conservation status granted by Birmingham City Council in 1997. This project was funded by Phoenix Venture Holdings.

Central Avenue, The Austin Village, Northfield, Birmingham, United Kingdom where they is commemorated

HERBERT AUSTIN Herbert Austin was born on 8th November 1866. He always had a passion for cars and successfully managed the Wolseley Tool and Motor Car Company in Birmingham. Under his direction Wolseley cars won international renown. In 1905 he decided that it was time to start his own company, buying the former White and Pike factory site for £7,750, so motor manufacturing began at Longbridge. During the First World War the company expanded to over 20,000 employees - producing a diverse range of materials, including 2,000 fighter aircraft. In 1917, recognising the Austin Motors contribution to the war effort, Herbert Austin was knighted. He was elected MP in 1918 for King's Norton, Birmingham, and office he held for six years. In the 1936 Honours List Sir Herbert Austin was created a Baron and elevated to the peerage. He took the title of Lord Austin of Longbridge. Lord Austin died on 23rd May, 1941 and is buried in Lickey Parish Church, Rose Hill, Lickey.