Thomas Henry Gem was born in Birmingham, the son of William Gem, also a solicitor, and was educated at King's College London. From 1841 he practised as a solicitor in Birmingham, becoming a magistrate's clerk in 1856.Highly active in local life, Gem wrote journalism and drama for several local publications, rose to the rank of Major in the 1st Warwickshire Rifle Volunteer Corps and was active in numerous sports including cricket and athletics. He is recorded as having won a bet by running the 21 miles from Birmingham to Warwick in under three and a half hours.Among Gem's sporting interests was the game of rackets, which he played at the Bath Street Racquets Club adjacent to the Racquet Court Inn in Bath Street, Birmingham with his friend Augurio Perera, a Spanish merchant based in Birmingham. Frustrated at the complex and expensive facilities required for rackets, however, the two developed a similar game that could be played outdoors and may have been played on Perera's croquet lawn at 8 Ampton Road in Edgbaston, incorporating elements of rackets alongside features of the Basque game of pelota.This game is known to have been being played by 1865, though research has suggested that experimentation may have started as early as 1859. It thus clearly pre-dates the game of sphairistikè, whose rules were published and for which equipment was sold by Major Walter Clopton Wingfield from March 1874.Gem and Perera's game also bore a closer resemblance to modern tennis than Wingfield's in several significant respects, most notably in being played on a similarly sized and configured rectangular grass court, rather than the hourglass-shaped court with a 'waist' at the net that featured in Wingfield's sphairistikè.Gem and Perera’s game was originally known as Lawn rackets or pelota.

Major Thomas Henry Gem (21 May 1819 – 4 November 1881), known as Harry Gem, was an English lawyer, soldier, writer and sportsman.Alongside his friend Augurio Perera, he is credited as a lawn tennis pioneer. 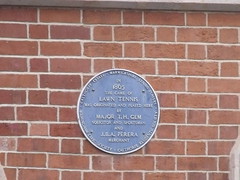 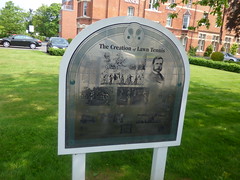 In 1865 the game of Lawn Tennis was originated and played here by Major T. H. Gem solicitor and sportsman and J. B. A. Perera merchant

8 Ampton Road, Edgbaston, Birmingham, United Kingdom where they originated and played the game of Lawn Tennis

The Creation of Lawn Tennis Lawn Tennis was invented in Leamington in 1872 by Major Harry Gem, a Birmingham solicitor and sportsman, who created a game similar to racquets which did not require an expensive indoor court and could be played outside. He played it first with his friend, Auguirio Perera, on the lawns of the Manor House Hotel where they formed the Leamington Lawn Tennis Club on the site now occupied by the apartment block you can see to the left of the hotel. Leamington Lawn Tennis and Squash Club is now located on Guys Cliffe Avenue.