woman, electrical engineer, Justice of the Peace, 1st director of the Electrical Association for Women (from 1924), and Dame Commander of the Most Excellent Order of the British Empire (from 1947)

Dame Caroline Harriet Haslett, DBE, JP (17 August 1895 – 4 January 1957) was an English electrical engineer, electricity industry administrator and champion of women's rights. She was the first secretary of the Women's Engineering Society and the founder and editor of its journal, The Woman Engineer. She was co-founder, alongside Laura Annie Willson and with the support of Margaret, Lady Moir, of the Electrical Association for Women, which pioneered such 'wonders', as they were described in contemporary magazines, as the All-Electric House in Bristol in 1935. She became the first director of the Electrical Association for Women in 1925. Her chief interest was in harnessing the benefits of electrical power to emancipate women from household chores, so that they could pursue their own ambitions outside the home. In the early 1920s, few houses had electric light or heating, let alone electrical appliances; the National Grid was not yet in existence. 'Way is being made by electricity for a higher order of women – women set free from drudgery, who have time for reflection; for self-respect. We are coming to an age when the spiritual and higher state of life will have freer development, and this is only possible when women are liberated from soul-destroying drudgery ... I want [every woman] to have leisure to acquaint herself more profoundly with the topics of the day.' — Caroline Haslett 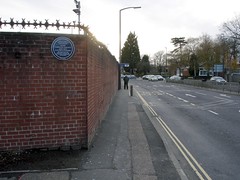