Group Captain Sir Douglas Robert Steuart Bader, (; 21 February 1910 – 5 September 1982) was a Royal Air Force flying ace during the Second World War. He was credited with 22 aerial victories, four shared victories, six probables, one shared probable and 11 enemy aircraft damaged. Bader joined the RAF in 1928, and was commissioned in 1930. In December 1931, while attempting some aerobatics, he crashed and lost both his legs. Having been on the brink of death, he recovered, retook flight training, passed his check flights and then requested reactivation as a pilot. Although there were no regulations applicable to his situation, he was retired against his will on medical grounds. After the outbreak of the Second World War in 1939, however, Douglas Bader returned to the RAF and was accepted as a pilot. He scored his first victories over Dunkirk during the Battle of France in 1940. He then took part in the Battle of Britain and became a friend and supporter of Air Vice Marshal Trafford Leigh-Mallory and his "Big Wing" experiments. In August 1941, Bader baled out over German-occupied France and was captured. Soon afterward, he met and was befriended by Adolf Galland, a prominent German fighter ace. Despite his disability, Bader made a number of escape attempts and was eventually sent to the prisoner of war camp at Colditz Castle. He remained there until April 1945 when the camp was liberated by the First United States Army. Bader left the RAF permanently in February 1946 and resumed his career in the oil industry. During the 1950s, a book and a film, Reach for the Sky, chronicled his life and RAF career to the end of the Second World War. Bader campaigned for the disabled and in the Queen's Birthday Honours 1976 was appointed a Knight Bachelor "for services to disabled people". He continued to fly until ill health forced him to stop in 1979. Bader died, aged 72, on 5 September 1982, after a heart attack. 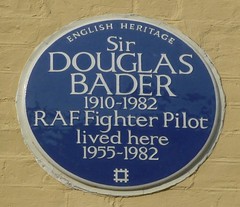