John Collier (18 December 1708 – 14 July 1786) was an English caricaturist and satirical poet known by the pseudonym of Tim Bobbin, or Timothy Bobbin. Collier styled himself as the Lancashire Hogarth. 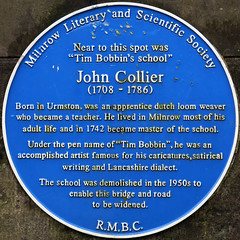 Near to this spot was 'Tim Bobbin's School'. John Collier (1708 - 1786) born in Urmston, was an apprentice dutch loom weaver who became a teacher. He lived in Milnrow most of his adult life and in 1742 became master of the school. Under the pen name of "Tim Bobbin", he was an accomplished artist famous for his caricatures, satirical writing and Lancashire dialect. The school was demolished in the 1950's to enable this bridge and road to be widened.