Knight Grand Cross of the Order of the Bath, Member of Parliament, and 50th Prime Minister of the United Kingdom (1905-1908)

Sir Henry Campbell-Bannerman, GCB (7 September 1836 – 22 April 1908) was a British Liberal Party politician who served as Prime Minister of the United Kingdom from 1905 to 1908 and Leader of the Liberal Party from 1899 to 1908. He also served as Secretary of State for War twice, in the Cabinets of Gladstone and Rosebery. He was the first First Lord of the Treasury to be officially called "Prime Minister", the term only coming into official usage five days after he took office. He also remains the only person to date to hold the positions of Prime Minister and Father of the House at the same time. Known colloquially as "CB", he was a firm believer in free trade, Irish Home Rule and the improvement of social conditions. He has been referred to as "Britain's first, and only, radical Prime Minister". Following a general election defeat in 1900, Campbell-Bannerman went on to lead the Liberal Party to a landslide victory over the Conservative Party at the 1906 general election, also the last election in which the Liberals gained an overall majority in the House of Commons. The government he subsequently led passed legislation to ensure trade unions could not be liable for damages incurred during strike action, introduced free school meals for all children, and empowered local authorities to purchase agricultural land from private landlords. Campbell-Bannerman resigned as Prime Minister on 3 April 1908 due to ill health and was replaced by his Chancellor, H. H. Asquith. He died nineteen days later. 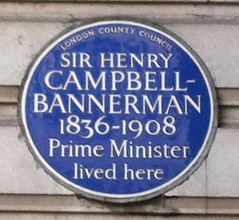