Sir Hans Sloane, 1st Baronet PRS (16 April 1660 – 11 January 1753), was an Anglo-Irish physician, naturalist, and collector, with a collection of 71,000 items which he bequeathed to the British nation, thus providing the foundation of the British Museum, the British Library, and the Natural History Museum, London. He was elected to the Royal Society at the age of 24. Sloane travelled to the Caribbean in 1687 and documented his travels and findings with extensive publications years later. Sloane was a renowned medical doctor among the aristocracy, and was elected to the Royal College of Physicians at age 27. He is credited with creating drinking chocolate. Streets and places were later named after him, including Hans Place, Hans Crescent, and Sloane Square in and around Chelsea, London – the area of his final residence – and also Sir Hans Sloane Square in his birthplace in Ireland, Killyleagh. 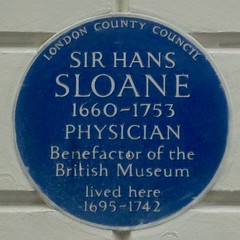