philosopher, Professor, and Knight Bachelor (from 1970)

Sir Alfred Jules "Freddie" Ayer FBA (/ɛər/; 29 October 1910 – 27 June 1989), usually cited as A. J. Ayer, was an English philosopher known for his promotion of logical positivism, particularly in his books Language, Truth, and Logic (1936) and The Problem of Knowledge (1956). He was educated at Eton College and the University of Oxford, after which he studied the philosophy of logical positivism at the University of Vienna. From 1933 to 1940 he lectured on philosophy at Christ Church, Oxford. During the Second World War Ayer was a Special Operations Executive and MI6 agent. He was Grote Professor of the Philosophy of Mind and Logic at University College London from 1946 until 1959, after which he returned to Oxford to become Wykeham Professor of Logic at New College. He was president of the Aristotelian Society from 1951 to 1952 and knighted in 1970. He was known for his advocacy of humanism, and was the second President of the British Humanist Association (now known as Humanists UK). Professor A. J. Ayer was President of the Homosexual Law Reform Society for a time; he remarked that "as a notorious heterosexual I could never be accused of feathering my own nest." 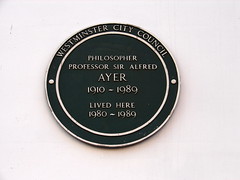