Sir Arthur John Gielgud, OM, CH (/ˈɡiːlɡʊd/; 14 April 1904 – 21 May 2000) was an English actor and theatre director whose career spanned eight decades. With Ralph Richardson and Laurence Olivier, he was one of the trinity of actors who dominated the British stage for much of the 20th century. A member of the Terry family theatrical dynasty, he gained his first paid acting work as a junior member of his cousin Phyllis Neilson-Terry's company in 1922. After studying at the Royal Academy of Dramatic Art he worked in repertory theatre and in the West End before establishing himself at the Old Vic as an exponent of Shakespeare in 1929–31. During the 1930s Gielgud was a stage star in the West End and on Broadway, appearing in new works and classics. He began a parallel career as a director, and set up his own company at the Queen's Theatre, London. He was regarded by many as the finest Hamlet of his era, and was also known for high comedy roles such as John Worthing in The Importance of Being Earnest. In the 1950s Gielgud feared that his career was threatened when he was convicted and fined for a homosexual offence, but his colleagues and the public supported him loyally. When avant-garde plays began to supersede traditional West End productions in the later 1950s he found no new suitable stage roles, and for several years he was best known in the theatre for his one-man Shakespeare show Ages of Man. From the late 1960s he found new plays that suited him, by authors including Alan Bennett, David Storey and Harold Pinter. During the first half of his career, Gielgud did not take the cinema seriously. Though he made his first film in 1924, and had successes with The Good Companions (1933) and Julius Caesar (1953), he did not begin a regular film career until his sixties. Gielgud appeared in more than sixty films between Becket (1964), for which he received his first Academy Award nomination for playing Louis VII of France, and Elizabeth (1998). As the acid-tongued Hobson in Arthur (1981) he won the Academy Award for Best Supporting Actor. His film work further earned him a Golden Globe Award and two BAFTAs. Although largely indifferent to awards, Gielgud had the rare distinction of winning an Oscar, an Emmy, a Grammy, and a Tony. He was famous from the start of his career for his voice and his mastery of Shakespearean verse. He broadcast more than a hundred radio and television dramas between 1929 and 1994, and made commercial recordings of many plays, including ten of Shakespeare's. Among his honours, he was knighted in 1953 and the Gielgud Theatre was named after him. From 1977 to 1989, he was president of the Royal Academy of Dramatic Art. 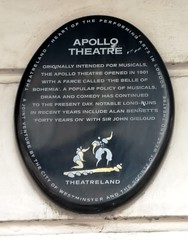 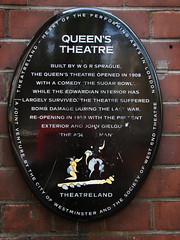 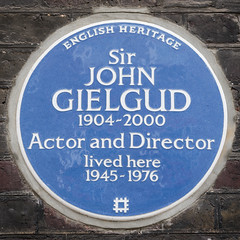 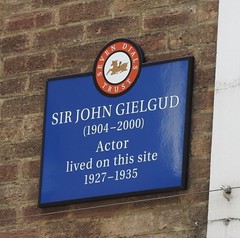 Apollo Theatre Originally intended for musicals, the Apollo Theatre opened in 1901 with a farce called "The Belle of Bohemia". A popular policy of musicals, drama and comedy has continued to the present day. Notable long runs in recent years include Alan Bennett's "Forty Years On" with Sir John Gielgud

The Olympic Cinema This was built as Byfeld Hall in 1906, on the site of Byfield House, the 17th century residence of a former Governor of St Helena. The hall was a cinema and a theatre; Charles Laughton, John Gielgud and Claude Rains first trod the boards here. In 1966 it became a famous recording studio where The Rolling Stones, The Beatles, Led Zeppelin, Jimi Hendrix, David Bowie, Madonna, Massive Attack and many more recorded. U2 were the last to record here in 2009. It has reverted to its former use as a cinema once again. The Homestead (to the left) is 18th century, but the cottage next door is later

Church Rd, Barnes, London, United Kingdom where they was