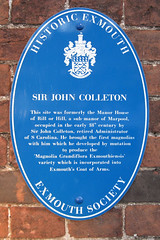 Sir John Colleton. This site was formerly the Manor House of Rill or Hill, a sub-manor of Marpool, occupied in the early 18th century by Sir John Colleton, retired Administrator of S Carolina. He brought the first magnolias with him which he developed by mutation to produce the 'Magnolia Grandiflora Exmouthiensis' variety which is incorporated into Exmouth's Coat of Arms.