Daniel Mendoza (5 July 1764 – 3 September 1836) (often known as Dan Mendoza) was an English prizefighter, who became the 16th boxing champion of England from 1792–1795. He was of Sephardic or Spanish Jewish descent. Mendoza was the most accomplished and scientific fighter of his time; he was intelligent, communicative, a master of ring strategy and defense, and several rungs above his contemporaries. His life was a study in contrasts, however. He could be brave, kind, and charismatic, or dangerously violent, and was found guilty of crimes of fraud and assault in 1793 and 1795. His poor money management skills and lack of business acumen landed him in debtors' prison on several occasions. Regardless of his shortcomings, he revolutionized self-defense with his book The Art of Boxing, became an heroic and admired figure, and elevated the status of Jews in London during a period of significant antisemitism. 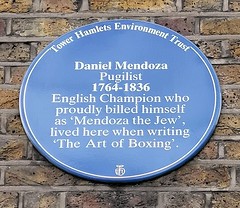 Daniel Mendoza, pugilist, 1764-1836 English Champion who proudly billed himself as 'mendoza the Jew', lived here when writing 'The Art of Boxing'

This plaque has been erected by the Jewish East End Celebration Society in memory of Daniel Mendoza (1764-1836) the father of scientific boxing, who was buried in a spot nearby