former slave, The African, and writer

Olaudah Equiano (c. 1745 – 31 March 1797), known in his lifetime as Gustavus Vassa (/ˈvæsə/), was a prominent African in London, a freed slave who supported the British movement to end the slave trade. His autobiography, published in 1789 and attracting attention, was considered highly influential in gaining passage of the Slave Trade Act 1807, which ended the African trade for Britain and its colonies. Since the late 20th century, there has been some debate on his origins, but most of his account has been extensively documented. His last master was Robert King, an American Quaker merchant who allowed Equiano to trade on his own account and purchase his freedom in 1766. Equiano settled in England in 1767 and worked and traveled for another 20 years as a seafarer, merchant, and explorer in the Caribbean, the Arctic, the American colonies, South and Central America, and the United Kingdom. In London, Equiano (identifying as Gustavus Vassa during his lifetime) was part of the Sons of Africa, an abolitionist group composed of prominent Africans living in Britain, and he was active among leaders of the anti-slave trade movement in the 1780s. He published his autobiography, The Interesting Narrative of the Life of Olaudah Equiano (1789), which depicted the horrors of slavery. It went through nine editions and aided passage of the British Slave Trade Act of 1807, which abolished the African slave trade. Since 1967, his memoir has been regarded as the "true beginning of modern African literature". As a free man, Equiano had a stressful life; he had suffered suicidal thoughts before he became a born-again Christian and found peace in his faith. After settling in London, in 1792 Equiano married an English woman named Susannah Cullen and they had two daughters. He died in 1797 in London; his gravesite is unknown. Equiano's death was recognized in Britain as well as by American newspapers. Plaques commemorating his life have been placed at buildings where he lived in London. Since the late 20th century, when his autobiography was published in a new edition, he has been increasingly studied by a range of scholars, including many from Nigeria. 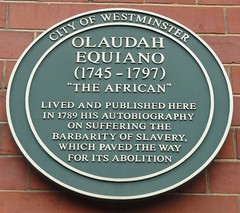 Olaudah Equiano (1745-1797) "The African" lived and published here in 1789 his autobiography on suffering the barbarity of slavery, which paved the way for its abolition