conductor, composer, Victor Herbert Orchestra organizer, author of the operettas Naughty Marietta and Sweethearts, advocate of the Copyright Law of 1909, founder of ASCAP, cellist, and conductor of the Pittsburgh Orchestra (1898-1904)

Victor August Herbert (February 1, 1859 – May 26, 1924) was an American composer, cellist and conductor of English and Irish ancestry and German training. Although Herbert enjoyed important careers as a cello soloist and conductor, he is best known for composing many successful operettas that premiered on Broadway from the 1890s to World War I. He was also prominent among the Tin Pan Alley composers and was later a founder of the American Society of Composers, Authors, and Publishers (ASCAP). A prolific composer, Herbert produced two operas, a cantata, 43 operettas, incidental music to 10 plays, 31 compositions for orchestra, nine band compositions, nine cello compositions, five violin compositions with piano or orchestra, 22 piano compositions and numerous songs, choral compositions and orchestrations of works by other composers, among other music. In the early 1880s, Herbert began a career as a cellist in Vienna and Stuttgart, during which he began to compose orchestral music. Herbert and his opera singer wife, Therese Förster, moved to the U.S. in 1886 when both were engaged by the Metropolitan Opera. In the U.S., Herbert continued his performing career, while also teaching at the National Conservatory of Music, conducting and composing. His most notable instrumental compositions were his Cello Concerto No. 2 in E minor, Op. 30 (1894), which entered the standard repertoire, and his Auditorium Festival March (1901). He conducted the Pittsburgh Symphony from 1898 to 1904 and then founded the Victor Herbert Orchestra, which he conducted throughout the rest of his life. Herbert began to compose operettas in 1894, producing several successes, including The Serenade (1897) and The Fortune Teller (1898). Some of the operettas that he wrote after the turn of the 20th century were even more successful: Babes in Toyland (1903), Mlle. Modiste (1905), The Red Mill (1906), Naughty Marietta (1910), Sweethearts (1913) and Eileen (1917). After World War I, with the change of popular musical tastes, Herbert began to compose musicals and contributed music to other composers' shows. While some of these were well-received, he never again achieved the level of success that he had enjoyed with his most popular operettas. 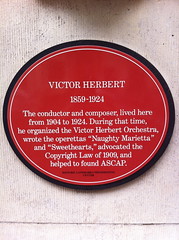 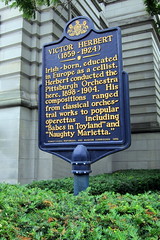 Victor Herbert 1859-1924 The conductor and composer, lived here from 1904 to 1924. During that time, he organized the Victor Herbert Orchestra, wrote the operettas “Naughty Marietta” and “Sweethearts,” advocated the Copyright Law of 1909, and helped to found ASCAP.

Victor Herbert (1859-1924), Irish-born, was educated in Europe as a cellist. Herbert conducted the Pittsburgh Orchestra here, from 1898-1904. His compositions ranged from classical orchestral works to popular operattas including "Babes in Toyland" and "Naughty Marletta."