Beatrix Cadwalader Farrand (née Jones; June 19, 1872 – February 28, 1959) was an American landscape gardener and landscape architect. Her career included commissions to design about 110 gardens for private residences, estates and country homes, public parks, botanic gardens, college campuses, and the White House. Only a few of her major works survive: Dumbarton Oaks in Washington, D.C., the Abby Aldrich Rockefeller Garden on Mount Desert, Maine, the restored Farm House Garden in Bar Harbor, the Peggy Rockefeller Rose Garden at the New York Botanical Garden (constructed after Farrand's death, using her original plans, and opened in 1988), and elements of the campuses of Princeton, Yale, and Occidental. Farrand was one of the founding eleven members, and the only woman, of the American Society of Landscape Architects. Beatrix Farrand is one of the most accomplished persons, and women, recognized in both the first decades of the landscape architecture profession and the centuries of landscape garden design arts and accomplishments. 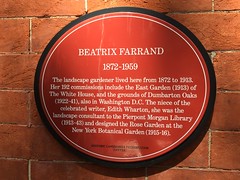