Edna St. Vincent Millay (February 22, 1892 – October 19, 1950) was an American lyrical poet and playwright. Encouraged to read the classics at home, she was too rebellious to make a success of formal education, but she won poetry prizes from an early age, including the Pulitzer Prize in 1923, and went on to use verse as a medium for her feminist activism. She also wrote verse-dramas and a highly-praised opera, The King's Henchman. Her novels appeared under the name Nancy Boyd, and she refused lucrative offers to publish them under her own name. Millay was a prominent social figure of New York City's Greenwich Village just as it was becoming known as a bohemian writer's colony, and she was noted for her uninhibited lifestyle, forming many passing relationships with both men and women. She was also a social and political activist and those relationships included prominent anti-war activists including Floyd Dell, editor of the radical magazine The Masses, and perhaps John Reed. She became a prominent feminist of her time; her poetry and her example, both subversive, inspired a generation of American women. Her career as a poet was meteoric. In 1923 she became the first woman to win the Pulitzer prize in poetry. She became a performance artist super-star, reading her poetry to rapt audiences across the country. A road accident in middle-age left her a partial invalid and morphine-dependent for years. Yet near the end of her life, she wrote some of her greatest poetry. 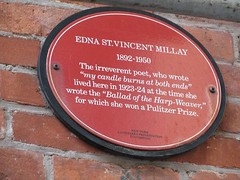 Edna St. Vincent Millay 1892-1950 The irreverent poet, who wrote "my candle burns at both ends" lived here in 1923-24 at the time she wrote the "Ballad of the Harp-Weaver," for which she won a Pulitzer Prize.

38 Commerce Street. In 1924 Edna St. Vincent Millay and a group of theatre artists converted a box factory into what would become The Cherry Lane Theatre. Through the years, it has become a showcase for the early works of Edward Albee, Lanford Wilson, Harold Pinter, and Sam Shepard, and continues to nurture emerging artists. Acclaimed actress Kim Hunter 1922-2002, lived above this theatre with her playwright husband Robert Emmett from 1954 until her death. Best known for creating the role of "Stella" in the Broadway and film version of "A Streetcar Named Desire" Kim's Academy Award-winning career spanned over 50 years of stage, screen, and television. She was a lifetime member of the BBC Block Association and a beloved citizen of Greenwich Village.