Julia Margaret Cameron (née Pattle; 11 June 1815 – 26 January 1879) was a British photographer who is considered one of the most important portraitists of the 19th century. She is known for her soft-focus close-ups of famous Victorian men and for illustrative images depicting characters from mythology, Christianity, and literature. She also produced sensitive portraits of women and children. After establishing herself first among Calcutta's Anglo-Indian upper-class and then among London's cultural elite, Cameron formed her own salon frequented by distinguished Victorians at the seaside village of Freshwater, Isle of Wight. After showing a keen interest in photography for many years, Cameron took up the practice at the relatively late age of 48, after her daughter gave her a camera as a present. She quickly produced a large body of work capturing the genius, beauty, and innocence of the men, women, and children who visited her studio at Freshwater, and created unique allegorical images inspired by tableaux vivants, theatre, 15th-century Italian painters, and the work of her creative contemporaries. Her photography career was short but productive; she made around 900 photographs over a 12-year period. Cameron's work was contentious in her own time. Critics lambasted her softly focused and unrefined images, and considered her illustrative photographs amateurish and hammy. However, her portraits of respected men (such as Henry Taylor, Charles Darwin, and Sir John Herschel) have been consistently praised, both in her own life and in reviews of her work since. Her images have been described as "extraordinarily powerful" and "wholly original", and she has been credited with producing the first close-ups in the history of the medium. 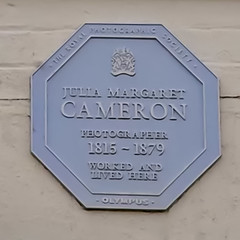