T. Rex were an English rock band, formed in 1967 by singer-songwriter and guitarist Marc Bolan. The band was initially called Tyrannosaurus Rex, and released four psychedelic folk albums under this name. In 1969, Bolan began to change the band's style towards electric rock, and shortened their name to T. Rex the following year. This development culminated in 1970's "Ride a White Swan", and the group soon became pioneers of the glam rock movement. From 1970 to 1973, T. Rex encountered a popularity in the UK comparable to that of the Beatles, with a run of eleven singles in the UK top ten. They scored four UK number one hits, "Hot Love", "Get It On", "Telegram Sam" and "Metal Guru". The band's 1971 album Electric Warrior received critical acclaim as a pioneering glam rock album. It reached number 1 in the UK. The 1972 follow-up, The Slider, entered the top 20 in the US. Following the release of "20th Century Boy" in 1973, which reached number three in the UK, T. Rex's appeal began to wane, though the band continued releasing one album per year. In 1977, founder, songwriter and sole constant member Bolan died in a car crash several months after the release of the group's final studio album Dandy in the Underworld, and the group disbanded. T. Rex have continued to influence a variety of subsequent artists. The band will be inducted into the Rock and Roll Hall of Fame in 2020. 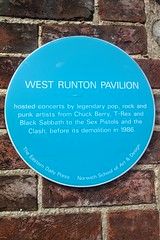 Frank Freeman ran The Dancing Club here with his wife Wynn. Between 1968-1971 many famous groups played here such as Captain Beefheart, Fleetwood Mac and Tyrannosaurus Rex

The Gliderdrome where locals have danced since 1939. Otis Redding, Stevie Wonder, Elton John, T. Rex, The Strawbs and Yes all played here.

The Gliderdrome, Boston, United Kingdom where it played