Fellow of the Royal Society and master potter

Josiah Wedgwood FRS (12 July 1730 – 3 January 1795) was an English potter, entrepreneur, and abolitionist. Founding the Wedgwood company in 1759, he developed improved pottery bodies by systematic experimentation, and was the leader in the industrialisation of the manufacture of European pottery. The renewed classical enthusiasms of the late 1760s and early 1770s were of major importance to his sales promotion. His expensive goods were in much demand from the upper classes, while he used emulation effects to market cheaper sets to the rest of society. Every new invention that Wedgwood produced – green glaze, creamware, black basalt and jasperware – was quickly copied. Having once achieved efficiency in production, he obtained efficiencies in sales and distribution. His showrooms in London gave the public the chance to see his complete range of tableware. Wedgwood's company never made porcelain during his lifetime, but specialised in fine earthenwares and stonewares that had many of the same qualities, but were considerably cheaper. He made great efforts to keep the designs of his wares in tune with current fashion. He was an early adopter of transfer printing which gave similar effects to hand-painting for a far lower cost. Meeting the demands of the consumer revolution that helped drive the Industrial Revolution in Britain, Wedgwood is credited as a pioneer of modern marketing. He pioneered direct mail, money back guarantees, self-service, free delivery, buy one get one free, and illustrated catalogues. A prominent abolitionist fighting slavery, Wedgwood is remembered too for his Am I Not a Man And a Brother? anti-slavery medallion. He was a member of the Darwin–Wedgwood family, and he was the grandfather of Charles and Emma Darwin. 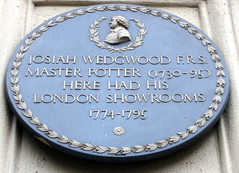 Greek Street, London, United Kingdom where they had his London showrooms