author of Dial M For Murder

Frederick Major Paull Knott (28 August 1916 – 17 December 2002) was an English playwright and screenwriter known for his complex crime-related plots. Although he was a reluctant writer and completed only a small number of plays in his career, two have become well-known: the London-based stage thriller Dial M for Murder, later filmed in Hollywood by Alfred Hitchcock, and the 1966 play Wait Until Dark, which was adapted to a Hollywood film directed by Terence Young. He also wrote the Broadway mystery Write Me a Murder. 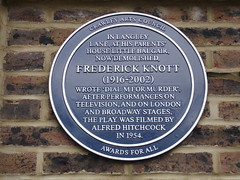 In Langley Lane, at his parents' house Little Balgair, now demolished, Frederick Knott (1916-2002) wrote 'Dial M For Murder'. After performances on television, and on London and Broadway stages, the play was filmed by Alfred Hitchcock in 1954