Alfred Dillwyn "Dilly" Knox, CMG (23 July 1884 – 27 February 1943) was a British classics scholar and papyrologist at King's College, Cambridge and a codebreaker. As a member of the Room 40 codebreaking unit he helped decrypt the Zimmermann Telegram which brought the USA into the First World War. He then joined the Government Code and Cypher School (GC&CS). As Chief Cryptographer, Knox played an important role in the Polish-French-British meetings on the eve of the Second World War which disclosed Polish cryptanalysis of the Axis Enigma to the Allies. At Bletchley Park he worked on the cryptanalysis of Enigma ciphers until his death in 1943. He built the team and discovered the method that broke the Italian Naval Enigma, producing the intelligence credited with Allied victory at the Battle of Cape Matapan. In 1941 Knox broke the Abwehr Enigma. By the end of the war, Intelligence Service Knox had disseminated 140,800 Abwehr decrypts, including intelligence important for D-Day. 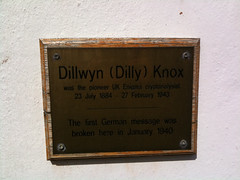 Bletchley Park, Bletchley, United Kingdom where they was