Major-General Robert Clive, 1st Baron Clive (29 September 1725 – 22 November 1774), also known as Clive of India, was the first British Governor of the Bengal Presidency.He is credited along with Warren Hastings for laying the foundation of the British Empire in India. He began as a writer for the East India Company (EIC) who established the military and political supremacy of the EIC by securing a decisive victory in Bengal. In return for supporting the Nawab Mir Jafar on the throne, Clive was granted a jaghire of 30,000 pounds per year which was the rent the EIC would otherwise pay to the Nawab for their tax farming concession, when he left India he had a fortune of 180,000 pounds which he remitted through the Dutch East India Company. Blocking impending French mastery of India, and eventual British expulsion from the continent, Clive improvised a military expedition that ultimately enabled the EIC to adopt the French strategy of indirect rule via puppet government. Hired by the EIC to return a second time to India, Clive conspired to secure the Company's trade interests by overthrowing the Ruler of Bengal, the richest state in India. Back in England, he used his treasure from India to secure an Irish barony from the then Whig PM, Thomas Pelham-Holles, 1st Duke of Newcastle, and a seat for himself in Parliament, via Henry Herbert, 1st Earl of Powis, representing the Whigs in Shrewsbury, Shropshire (1761–1774), as he had previously in Mitchell, Cornwall (1754–1755). Clive has become one of the most controversial figures in all British military history. His achievements included checking French Imperial ambitions on the Coromandel Coast and establishing EIC control over Bengal, thereby taking the first step towards establishing the British Raj, though he worked only as an agent of the East India Company, not the British government. He was vilified by his political rivals in Britain, and put on trial before Parliament. Following the killing of George Floyd in Minneapolis in May 2020, and the toppling by Black Lives Matter protestors of the statue of slave-trader Edward Colston in Bristol, more than 20,000 people signed petitions calling for the removal of the statue of Clive in the centre of The Square in Shrewsbury , while similar petitions called for the removal of the statue of Clive outside the Foreign and Commonwealth Office in London. 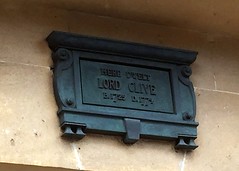 14 The Circus, Bath, United Kingdom where they lived