leader of the Alfriston Gang of smugglers 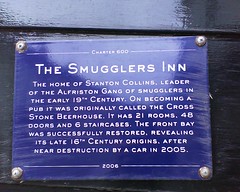 The Smugglers Inn The home of Stanton Collins, leader of the Alfriston Gang of smugglers in the early 19th Century. On becoming a pub it was originally called the Cross Stone Beerhouse. It has 21 rooms, 48 doors and 6 staircases. The front bay was successfully restored, revealing its late 16th Century origins, after near destruction by a car in 2005.